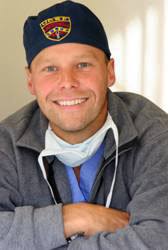 University of California, San Francisco
“The Clinical Scholar Research Award allowed me to address an important aspect of anesthesia research long before it was ripe for NIH funding. Federal agencies are now recognizing the importance of this research, and thanks to the IARS award, we now have strong preliminary data to support an application for federal funding.”

Dr. Stratmann is testing how anesthesia affects hippocampal function, and working to define the cognitive domain affected by infantile anesthesia. His hypothesis is that anesthesia given to children younger than two years old for more than two hours impairs hippocampal function as these children grow older. Dr. Stratmann aims to establish a cognitive test that is translatable from rodents to humans, so the effectiveness of potential strategies to treat or prevent cognitive decline after anesthesia in infancy can be assessed.

Anesthesia in infancy impairs performance in recognition memory tasks in mammalian animals, but it is unknown if this occurs in humans. Successful recognition can be based on stimulus familiarity or recollection of event details. Several brain structures involved in recollection…

Anesthetic agents cause cell death in the developing rodent brain and long-term, mostly hippocampal-dependent, neurocognitive dysfunction. However, a causal link between these findings has not been shown…

While studying neurotoxicity in rats, we observed that the anesthetic minimum alveolar anesthetic concentration (MAC) of isoflurane decreases with increasing duration of anesthesia in 7-day-old…